A 24-inch PC monitor with the ability to update its image 500 times per second will be available soon, Asus and Nvidia announced Tuesday. The monitor should boost desktop monitors from the 360 ​​Hz max native refresh rate they see today while putting a mysterious new spin on an old panel technology.

Aptly named the Asus ROG Swift 500Hz Gaming Monitor, it manages high refresh rates with lower resolution. The 1920×1080 screen leverages a new take on TN (twisted nematic) panels called E-TN, with the “E” standing for esports. According to Asus, the E-TN panel offers “60 percent better response times than standard TN panels,” and in its own announcement, Nvidia claimed the E-TN panel brings “maximum motion and clarity.” But neither detailed how the technology differs from regular TN.

Standard TN panels have been becoming less common among PC monitor releases as IPS (in-plane switching) and VA (vertical alignment) panels continue catching up in speed while being known for stronger viewing angles, in the case of IPS, and larger contrast ratios , in the case of VA. Those opting for TN are willing to sacrifice some image quality in the name of speed or, often, lower prices. It’s unclear how much sacrifice E-TN may require (besides a max resolution of 1080p) or how much of a premium it’ll have compared to today’s standard TN monitors.

Today, you can buy 360 Hz monitors, including some that can overclock to 390 Hz, but 500 Hz is a new level. The panel maker behind the monitor wasn’t specifically named, but Nvidia’s announcement made a point to note its work with partner AU Optronics, which we recently showed off in 480 Hz monitors and laptops, with the former coming in the 24-inch TN variation . BOE has also been linked with a 500 Hz panel that uses an oxide TFT (thin-film transistor) active layer rather than the more common silicon TFT active layer.

So who needs the fastest PC monitor yet? According to Nvidia’s announcement, “this benefits every game and gamer, not just competitive games and esports pros.” Although, if you prefer a sharper image over the fastest speeds, don’t have a powerful enough system to push 500 fps, or play graphically intensive games where 500 fps isn’t feasible, you won’t fit in that “every games and gamers” category.

Nvidia claimed that when paired with a system that can push 500 frames per second—which, of course, is no short order—you would be able to track movement more easily. In a video Nvidia shared claiming to demonstrate the benefits of 500 Hz, it showed a virtual character moving across the screen on a 144 Hz, 240 Hz, and 500 Hz display, and motion appeared jumpier with the lower refresh rates and frame rates.

Similarly, Nvidia claimed pushing 500 Hz and 500 fps would result in less ghosting, as you can see in the shot below: 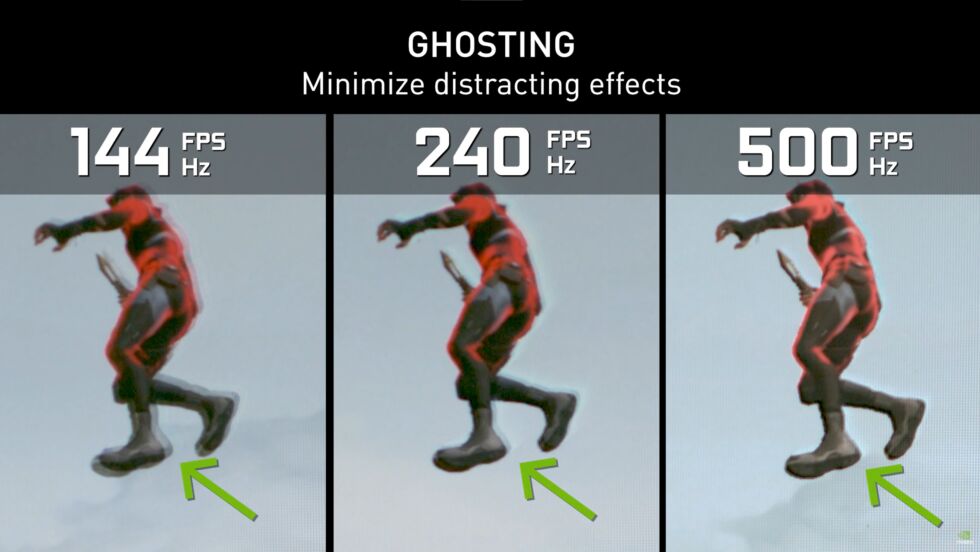 In Nvidia’s virtual keynote for the Computex conference this week, Jeff Fisher, senior vice president of Nvidia’s GeForce business, said Asus’ 500 Hz monitor has the “lowest latency” of any monitor with Nvidia G-Sync. Nvidia also pointed to a system latency challenge it recently conducted with Steam players of various skills levels gaming with 25, 55, and 85 ms latency levels. The challenge led Nvidia to conclude that lower latency “improves your score regardless of aiming skill” and made “difficult aiming tasks possible.”

In addition to Nvidia G-Sync, which helps fight screen tears when your Nvidia graphics card’s frame rate and the monitor’s refresh rate don’t match up, Asus’ 500 Hz monitor will have Nvidia’s latency analyzer, Reflex. Nvidia claimed that playing a game on the monitor that also supports Reflex “can further reduce system latency,” which you could then measure with the monitor’s Reflex feature.

The upcoming display also supports Nvidia Vibrance Mode, which is made for gaming and “allows more light to travel through the LCD crystals, giving colors new levels of vibrancy and allowing you to pick out details and highlights that might give away an enemy’s position,” Asus claimed.

Neither Asus nor Nvidia shared a release date for the Asus ROG Swift 500 Hz Gaming Monitor. Asus demoed its first 360 Hz monitor in person in January 2020, and those were available later that year; Although, as of writing, there doesn’t seem to be in-person demos of the ROG Swift 500 Hz yet.

You can watch Nvidia’s demo of 500 Hz below: