AMD Ryzen 6000 gets DisplayPort 2.0-certified, testing on other products ramps up

Pixel and speed enthusiasts have anticipated DisplayPort 2.0 products since the Video Electronics Standards Association (VESA), which makes the spec, announced its incoming in 2019. While the pandemic inhibited the ability to test products for supporting the video protocol and slowed its release, we ‘ve inched closer to seeing monitors, PCs, and other devices earn DisplayPort 2.0 certification.

VESA on Monday announced certification for AMD’s Ryzen 6000 laptop CPUs to support DisplayPort 2.0 at up to one of its highest data link rates, Ultra-high Bit Rate 10 (UHBR10), which has a 10Gbps link rate and max throughput of 40 Gbps across four lanes.

VESA introduced UHBR labels to DisplayPort 2.0 in February. Once DisplayPort 2.0 products are readily available, it’ll be easier to determine which products support the higher bandwidth capabilities of the backward-compatible spec. The move came after the HDMI Licensing Administrator, which makes the HDMI spec, received backlash for not clarifying which HDMI 2.1-certified products support the max capabilities. 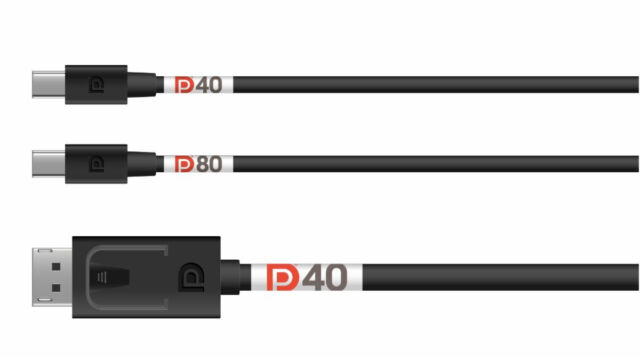 VESA announced that Ryzen 6000 mobile APUs are UHBR10-certified, but we are still waiting to see a product pass the test for DisplayPort 2.0 highest data link rates, UHBR13.5 and UHBR20. With the latter supporting up to 80Gbps, it would enable bandwidth-hungry uses, like 8K HDR video at 60 Hz or SDR video at greater resolutions.

This week, VESA is demoing DisplayPort 2.0 at the Society for Information Display’s Display Week conference in San Jose, California. The demo features a reference, Ryzen 6000-based PC connected to a DP40-certified cable, meaning it supports UHBR10 and up to 40Gbps, and a monitor using certified MediaTek chipsets. The demo, VESA told us, shows the spec supporting 4K resolution video running at a refresh rate of 144 Hz uncompressed. You can currently buy expensive 4K monitors aimed at gamers that can hit 144 Hz, but they use compression to achieve that refresh rate. 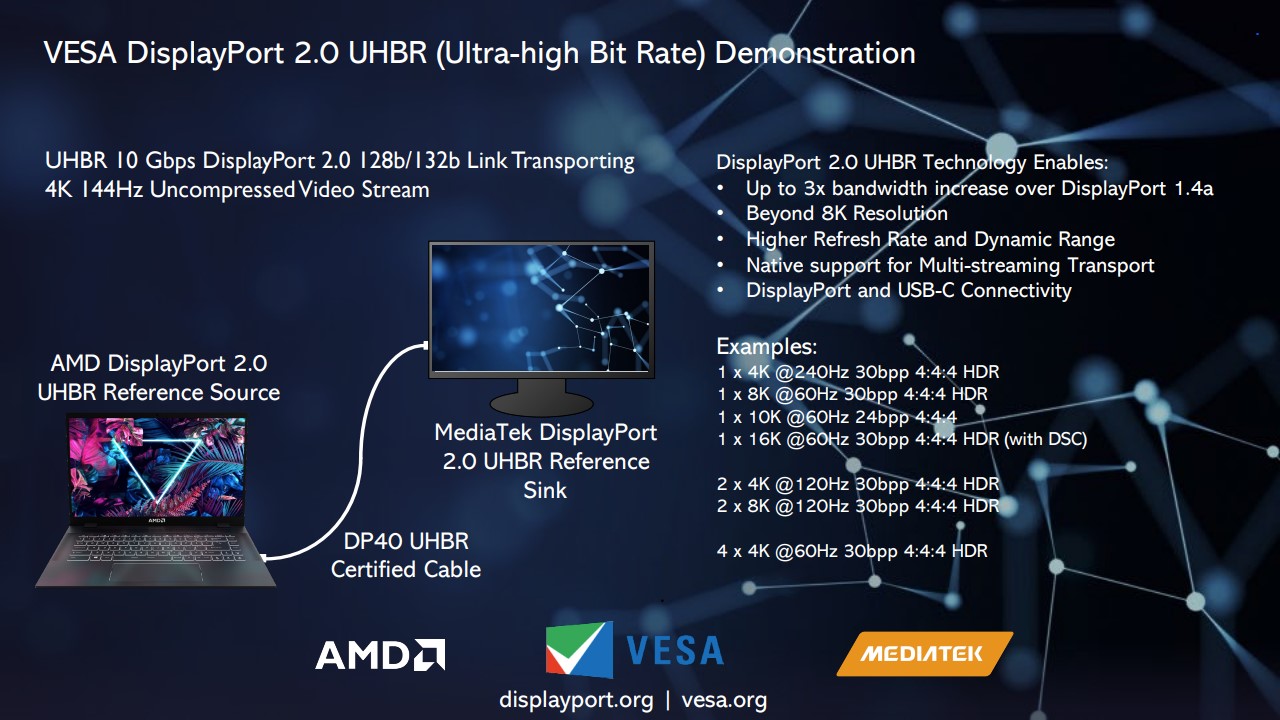 DisplayPort 2.0 is exciting for advanced single and multi-monitor setups with high resolutions and/or high speeds and no compression, such as 4K HDR content at a 240 Hz refresh rate or four 4K HDR monitors at 60 Hz.

You still can’t buy a DisplayPort 2.0 monitor, graphics card, or PC (some cables are already available commercially), but this week’s news shows significant progress toward making that happen.

VESA said its DisplayPort Authorized Test Centers are ready to test and certify UHBR products. Other source and display devices from VESA companies are undergoing the certification process, VESA noted.

In early 2021, VESA display rep Craig Wiley told Tom’s Hardware that VESA wasn’t able to hold DisplayPort 2.0 test events in 2020, which delayed debugging and development. Although, at that time, the exec expected consumer products to be available in the second half of 2021. Since VESA doesn’t make tech hardware, it wasn’t able to confirm to Ars Technica a firm release date for DisplayPort 2.0 consumer products, but the needle is moving in the right direction.

With VESA announcing verified reference silicon, the group “now has the testing infrastructure in place to evaluate and certify OEM end products,” and is “ready to work with the ecosystem to bring next-generation DisplayPort chipsets and IP to market,” James Choate , compliance program manager for VESA, said in a statement.