Some longtime Google users are facing a rough transition. In the early days of Google’s business-focused productivity service—first called “Google Apps for Your Domain” then “G Suite” and now “Google Workspace”—Google offered domain-branded Google “business” accounts for free. From 2006 to 2012, users could make a free Google Apps/G Suite account with a custom domain, so their email ended with a domain they owned, instead of “@gmail.com.” In January, Google announced a significant policy change and told these users they needed to start paying the standard business rate for their Google accounts or face an account shutdown. It’s an unfair rug pull for users who set up a free account years ago with no warning that Google might eventually charge for it. These people are in deep, with all data, emails, and purchases stored on these accounts, and it feels like data extortion to suddenly tell them to pay up or lose everything.

Google later relented somewhat and offered a vague escape hatch option, promising that someday these “Legacy G Suite” users could port their data and purchases to a free consumer Gmail account—with the caveat that Google won’t host their custom-domain email anymore . Many of the important specific details of this transition plan are not public yet, but what is specific is the deadline for payment and account shutdowns, and users are just left to flap in the breeze while their anxiety builds.

A key problem is that Google actually stopped pitching custom-domain email to consumers, and now these Legacy G Suite users have no obvious upgrade path. In the past, there was nothing wrong with using Google Apps/G Suite for non-business purposes, and Google even encouraged it. Just look at the original Google Apps for Your Domain blog post, which says Google launched the service after “listening to feedback from thousands of small businesses, K-12 schools, nonprofits, universities, even families with their own websites.” Google encouraged families to use this, and now it’s telling these families they are businesses.

My question is, why does this have to be so hard? Here’s an idea: Offer a Google Workspace (or Google One) “family plan” that supports a custom domain at a reasonable consumer rate. This isn’t a crazy idea because all of Google’s competitors already offer this. In my conversations with various people affected by the policy change, free G Suite users aren’t necessarily miffed about paying for a custom email domain. Still, they often aren’t businesses and don’t want to pay business rates for G Suite. 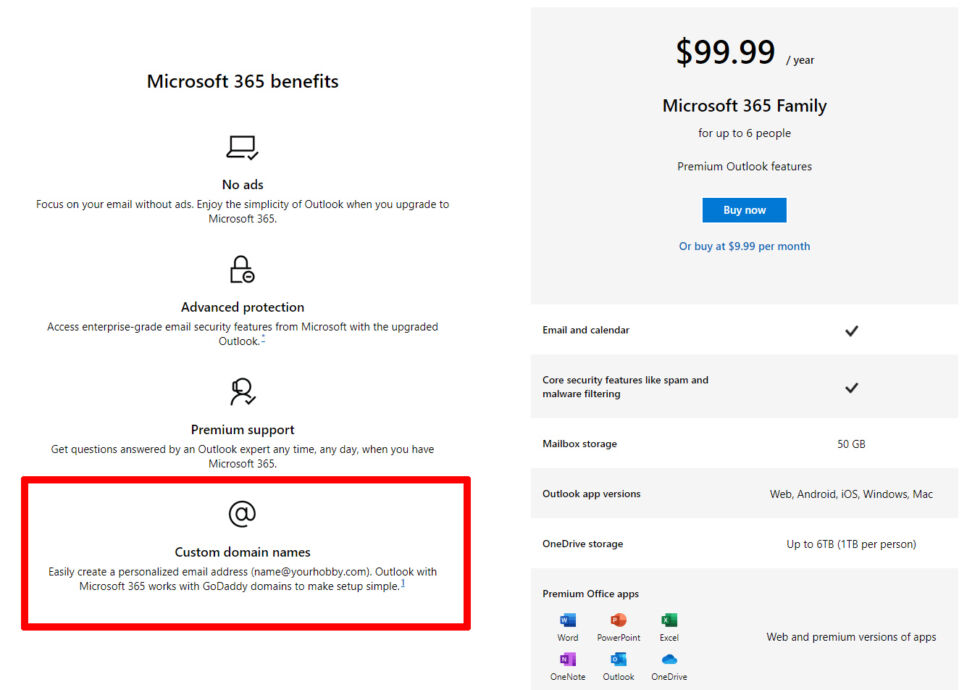 Apple’s comparable product is the iCloud+ subscription, which also offers custom domain email support, starting at $1 per user per month. That’s six times less than what Google charges, and Apple is offering 20GB more per user—50GB total. For six people, that would be $72 per year, while Google would charge $432 per year for a lower storage tier.