Google shocked us all when it decided to reveal the Pixel 7 live at Google I/O a few weeks ago. The phone, which isn’t due out until the fall, was officially confirmed as the “Pixel 7” and “Pixel 7 Pro” with promises of next-gen Google Tensor chips, a polished aluminum camera bar, and a few official pictures of the back We can learn a bit more about the device now, though, thanks to… an eBay listing?

Over the long weekend, some eBay seller had the bright idea to try to sell a prototype Pixel 7. The $530 listing of what is surely a stolen item has been removed from eBay, but you can still see an archive of the listing here. The seller listed the item saying it “comes with android 13 and pixel apps in development stage. Selling as is. No guarantees of any sort.” Hmmm. The seller at least scored what counts as the first in-person pictures of the Pixel 7, showing the device from all angles.

Enlarge / The Pixel 7, complete with that new camera bar and identifying prototype line symbols in the bottom third.

The Pixel 7 is very close to the Pixel 6, so there’s not a tone to look at, but this gives us a good look at that new camera bar. The Pixel 6 camera bar has one big sheet of glass across the entire back, while the Pixel 7’s camera bar is a big block of aluminum with a smaller glass cover for the lenses. The Pixel 7’s smaller camera glass should make it less susceptible to glare—it was easy for light to bounce around inside of the Pixel 6’s huge glass camera cover. The new look is aesthetically a downgrade, though. The Pixel 6 camera bar was a simple, continuous black strip that contrasted against the body color, while this aluminum is trying to match the glass body color, failing, and then has a black blob inside it for the camera lenses.

We also get a look at the top of the phone, which has a new design for the antenna window. The Pixel 6 had a big, rectangular antenna cutout that basically covered the entire top of the phone, and it was one of the few parts of the design we called “ugly.” The Pixel 7 in the photos has a much smaller, rounded window on the top, which looks a lot better. The Pixel 6’s cutout was only present on the mmWave models, and the non-mmWave models had no cutout at all. We have no idea what the connectivity specs are for this dubious eBay prototype. 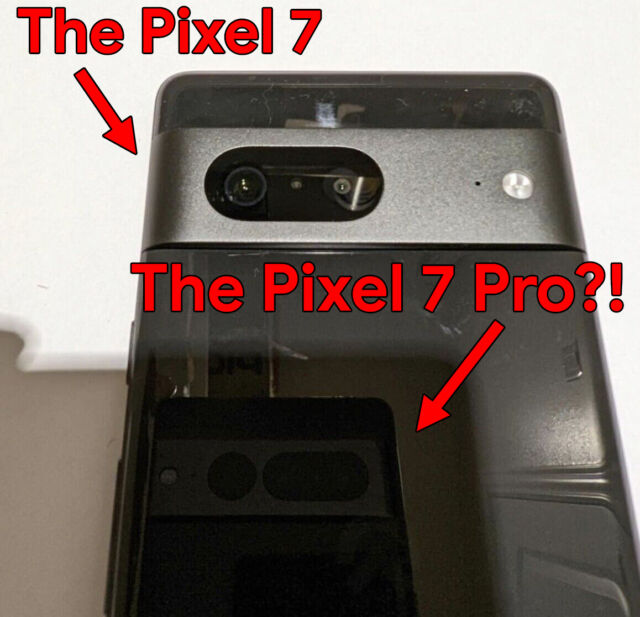 These pictures are of the smaller, cheaper “Pixel 7” model, but—in an incredible power move by the seller—some of these pictures are taken with a second prototype, the Pixel 7 Pro, which is clearly visible as a reflection in one of the pictures. Like the Pixel 7, the 7 Pro has that camera bar with a black oval housing two camera lenses, but there’s also a telltale second black circle for the zoom lens.

This seller really did not think through this listing. They’re selling a stolen item, which is not legal, and this sale was never going to complete. This thing is Google’s property, and you can’t sell it. There’s also an incredible amount of identifying information included in the eBay listing. First, the back of a prototype Google phone has special identifying markers that are all clearly visible. Instead of the usual “G” logo, you’ll find a prototype logo and then a series of lines that uniquely identifies this device, and nobody blurred those out, so Google knows exactly where this phone came from.

Second, in an attempt to somehow fool a buyer into thinking this is a legitimate sale, the seller included a screenshot from an IMEI checking service that lists the blacklist status of the phone as “clean,” meaning it was not reported as stolen at the time of the picture (it is definitely blacklisted now). The problem is, the seller didn’t blank out the IMEI number sufficiently. There was some thought given to this—a semi-transparent black marker effect was lightly passed over the number, but all that did was darken the IMEI number. An IMEI is a 15-digit number that uniquely identifies your phone for billing purposes, and 12 of those numbers, including the last seven, are fully on display in this listing. The seller also managed to include pictures of their hands several times.