Intel is trying to get its chip manufacturing back on track with “Intel 4,” due in 2023

Intel’s chip manufacturing technology has been outpaced by rivals like TSMC and Samsung in recent years, but the company is looking to put its troubles behind it. The first step forward will be the Intel 4 manufacturing process, which Intel has shared more details about at the Institute of Electrical and Electronics Engineers’ annual VLSI Technology Symposium (as reported by AnandTech and Tom’s Hardware). The new manufacturing tech is on track to be used in consumer chips starting in 2023, starting with Intel’s “Meteor Lake” CPU architecture. Meteor Lake will likely come to market as Intel’s 14th-generation Core CPU sometime next year.

Intel 4’s biggest improvement is its integration of extreme ultraviolet (EUV) lithography, which uses short-wavelength ultraviolet light to etch tiny patterns into silicon wafers. TSMC and Samsung use EUV technology in their most advanced manufacturing processes. Intel says that compared to the Intel 7 process, Intel 4 will enable either 21.5 percent better clock speeds using the same amount of power or the same speeds using 40 percent less power.

After Intel 4, Intel will move on to Intel 3, which is a higher-density iteration of Intel 4 using the same EUV technology. Notably, chipmakers will be able to port designs made for Intel 4 directly to Intel 3 without having to make changes, which will hopefully allow both Intel and third-party chip designers to start using it quickly (Intel 3 will be offered to third parties through Intel Foundry Services). By making smaller jumps between process technologies—introducing EUV lithography in Intel 4 and then optimizing for maximum density in Intel 3, rather than trying to do both at once—Intel hopes to avoid the delays and yield problems that held the 10nm/Intel 7 process back for so many years. 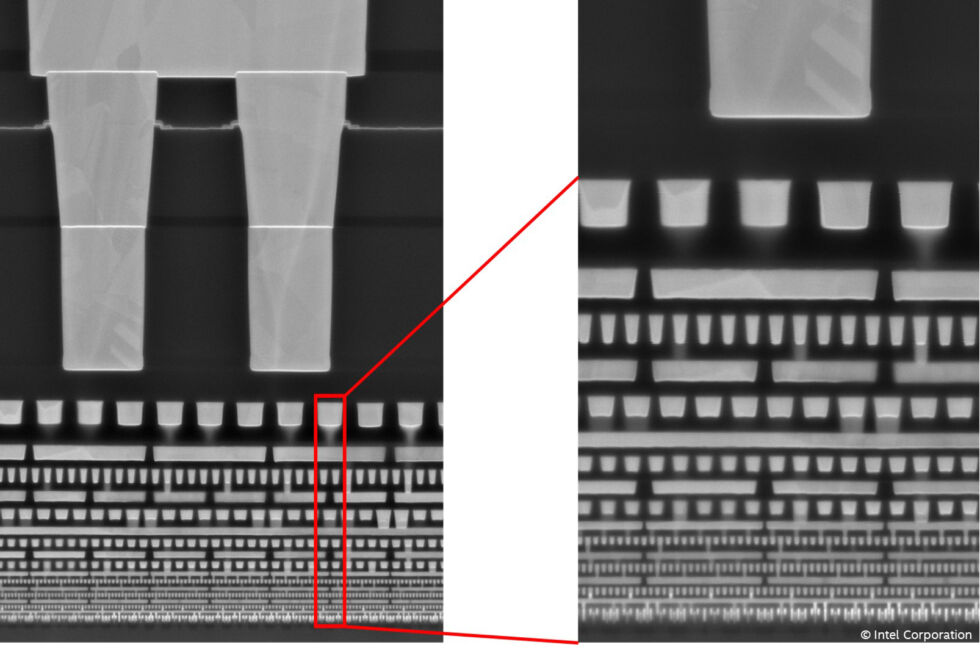 Enlarge / A cross section of a chip made using the Intel 4 process. Intel says the lower layers are made using EUV lithography, a technology that TSMC and Samsung are already using.

Intel largely blew its manufacturing lead in the mid-2010s due to numerous delays to its 14nm and 10nm process nodes. The 10nm chips were rolled out haltingly over three CPU generations, and its most-recent 12th-generation Core chips finally got the company’s entire consumer laptop and desktop CPU lineup back on the same architecture and manufacturing process for the first time in years. Intel published a multi-year plan intended to help it catch up to its competitors, but we’re taking that plan with a grain of salt until Intel proves that it can get past its execution problems.