iPadOS 15 Mini-Take a look at: Every little thing revolves across the dwelling display screen

Last year Apple released a major iOS update for iPhones, but some of the biggest changes didn’t make it to the iPad. This year the iPhone update is modest – so does that mean the iPad update is the big one this time around?

Well, that depends on your point of view. iPadOS 15 brings almost everything that iOS 15 brought to iPhones, but it also brings the important omissions from last year’s iOS 14 to the tablet. As a result, iPadOS 15 feels like a significant update if you haven’t been using an iPhone recently, but if you’ve already used iOS 14’s new home screen and app library features, it instead feels like it’s too late to the party .

We released an in-depth iPhone-focused review of iOS 15 earlier this week. Think of this as a quick addendum to this review that puts the iPad first. For more information on new features like Focus that aren’t iPad specific or a list of iPads supported by iPadOS 15, see the previous review.

Let’s start with the Home Screen, which saw the biggest transformation this year, although almost everything else about it was already available on iPhones when iOS 14 hit the market in late 2020.

Arguably the most significant introduction to iPadOS 15 is the app library view that iPhones got last year. Swiping all the way to the right on the home screen will take you here, which is where you’ll find a search box and multiple folders that contain all of the apps you have installed on your iPad. Unfortunately, as in iOS 14, you cannot define these folders yourself; the software generates them automatically.

The real benefit is that the home screen is no longer the only place to save apps. That said, you can remove apps from the home screen and access them at the same time using both Spotlight search and visiting the app library screen.

So if you have an app that you use every now and then but not every day – like checking in your investment portfolio or ordering an app for a specific restaurant – you can leave that app installed and use it whenever you want but keep it Your home screen clean and focused. 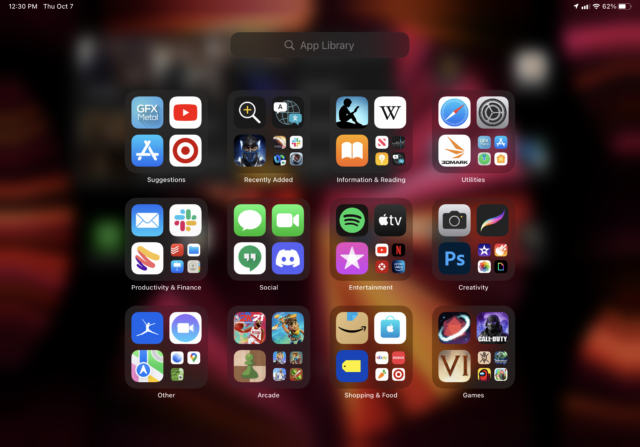 Enlarge / The app library in iPadOS 15.

When you try to delete an app from the home screen, you will be asked if you want to delete the app entirely or just move it to the app library.

Plus, you can now show or hide home screen pages, which works well with focus mode (see the iOS 15 review for details; it works the same on the iPad) to allow you more home screen customizations than ever before.

The iPad also gets something the iPhone didn’t have: access to the app library from the dock, which is much more convenient than swiping to the last page on the home screen.

The other major addition to the home screen is support for freeform widgets. The situation with widgets was a little strange; Homescreen widgets were introduced on iPadOS a few years ago, but this more robust update first hit the iPhone about a year ago and is just making its way onto the iPad with iPadOS 15.

While you used to be able to place widgets in a predefined location on the very first home screen page, you can now place them anywhere on the home screen and in a variety of sizes, including variations for certain widgets that weren’t available on iPhone.

You can either place widgets next to each other on the home screen next to app icons, or put them in a stack that only takes up as much space as a single widget. You can slide your finger over it to switch between widgets at this point. This is all just as we saw it on the iPhone when we checked iOS 14.

Enlarge / Here is one of the TV app’s widget sizes.

Unfortunately, arranging icons and widgets on the home screen is still a real agony. The “wobble mode” icon-and-widget placement approach and cascading list format of the home screen need to be abandoned; its limits have only become clearer as more customizations and features have been added.

However, if you can suffer from the frustration of breaking your layout many times while trying to get everything where you want it, the combination of widgets and the app library will completely change the way the home screen works on the iPad, if you want it too. (If you don’t, you can just ignore everything and use the iPad’s home screen as normal.)

When Apple announced iPadOS 15, it put multitasking at the center. The new here is mostly more intuitive ways to access features that existed before, but they’re all welcome.

For example, application windows in full screen or split view mode now have a button with three dots on top. When you tap or click on it, a small control panel will appear where you can choose either full screen, split view, or panning.

Tapping the full screen mode does exactly what you’d expect. it makes the app full screen. When you tap Split View, the app takes up half of the screen, then it drops you onto the home screen where you can choose another app to take up the other half.

Enlarge / At the top of the app on the left you can see the three options indicated by the multitasking button. And in the app on the right, you’ll see what the button looks like before you tap it. (These are the ellipses in the top center of the app.)

So far, the way to split view has been difficult. You have an app in full screen, then swipe up from the bottom of the screen to bring up the dock, then long-press an app in the dock and drag it to the side of the screen until it clicked in split view. Needless to say, this method wasn’t the best. The new setup is better and has the advantage of being intuitive which the old way wasn’t. You’d probably never find out the old way if not shown.

Finally, when you tap or click the slide-over button, the app will slide into slide-over, bringing it into an iPhone app shape and moving it over your full-screen or split-view apps. You can still swipe between slide-over apps or remove them from the screen and turn them back on at will.