iPadOS 16 has lots of updates, but new multitasking features require an M1 chip

CUPERTINO, Calif.—Apple formally announced the latest update to its iPad operating system, iPadOS 16, during the keynote presentation of its Worldwide Developers Conference (WWDC) on Monday. As usual, the tablet operating system will share many of the features and app updates introduced with the newest version of the iPhone-focused iOS, but it will also include a few iPad-specific changes to improve the multitasking and productivity capabilities of those larger devices .

An updated Collaboration feature, for instance, will allow users to work together in real time with specific apps. You’ll be able to send a document from Apple’s Pages app to a group through one “collaboration link,” allowing multiple users to edit the same file instead of everyone having to deal with their own copy. This ability appears to work similarly compared to apps like Google Docs. An entirely new app called FreeForm also provides a shared canvas for collaborative meetings, note-taking, sketching, and communication using FaceTime or Messages.

Speaking of Messages, the app is receiving the same updates that it’s getting in iOS 16 and macOS Ventura: the ability to edit or unsend recent messages, plus the ability to mark conversations as unread if you want to be reminded to come back to them later . 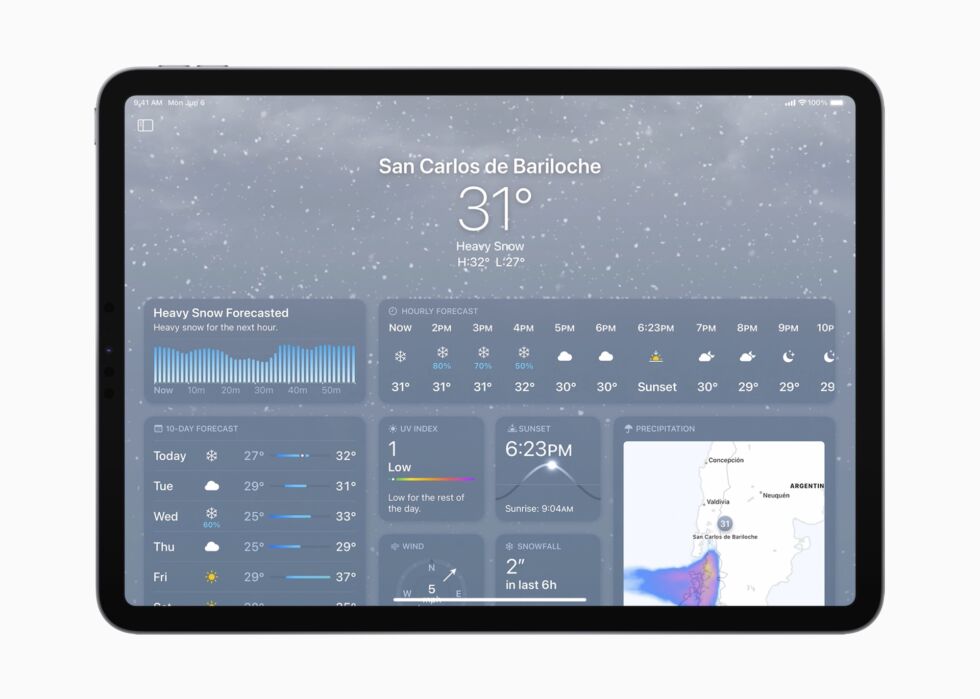 Enlarge / The iPad will finally get its own version of the Weather app.

Apple’s Weather app will (finally) arrive on iPads as part of the update, too, bringing a larger-screen version of the app that’s long been available on iPhones. The app includes the same information as the phone version but is repositioned to take better advantage of the iPad’s screen. Unfortunately, it seems like Apple’s developers still haven’t found a way to port the iPhone’s complex, resource-intensive Calculator app to the iPad.

The most significant new addition for power users who want their iPads to replace their laptops is Stage Manager, a feature Apple initially announced as one of macOS Ventura’s new features. A sort of half-stop between true windowed multitasking and macOS and iPadOS’s full-screen mode, Stage Manager allows you to focus on a small handful of apps at once. A column on the left side of your screen serves as an app switcher, allowing you to jump between focused apps.

On both the iPad and macOS, Stage Manager supports freely resizable, overlapping windows. We’ll need to see how this works in practice, but it could be an improvement over the iPad’s occasionally clunky split-screen multitasking modes. Apple is also using Stage Manager to bring full external display support to the iPad for the first time, rather than the half-hearted display mirroring feature that iPads have used up until now. You can use up to four apps per screen with Stage Manager—four on the iPad’s screen and four on the external display if you have one.

The bad news for iPad multitasking fans is that Stage Manager and external display support have high hardware requirements. They require an iPad Pro or iPad Air with an M1 chip, which means that only the latest generation of high-end iPads will be able to take advantage of the feature at all. This requirement is likely related to either processing power or RAM—the M1 iPads all include either 8GB or 16GB of RAM, just like the M1 Mac models. The A14 chip in the last-gen iPad Air only came with 4GB of RAM, while the A12Z in the 2020 iPad Pro models topped out at 6GB.

M1 iPads will also be able to take advantage of a macOS-like Display Zoom feature, which will allow iPads to use non-native display resolutions to fit more content on the screen at once (at the expense of a small but generally hard-to – notice reduction in clarity). To help with all of these multitasking features, M1 iPads will also support virtual memory swap files, something that conventional PCs and Macs have supported for decades—when you run out of RAM, the system will use “up to 16GB” of your storage as virtual RAM, rather than suspending tasks in the background as most iPhones and iPads do.

We’ve covered many of iPadOS 16’s other new features in our piece on iOS 16. A list of highlights includes the “Live Text” text recognition feature in videos, the ability to hand off FaceTime calls between your Apple devices, new Siri and Dictation Improvements, better parental controls, the iCloud Shared Photo Library feature, and more.

The iPadOS 16 update will be released this fall; a developer beta is available now, and a public beta will be open in the next few weeks. The update will run on most iPads that can run iPadOS 15, but not the iPad Air 2 or fourth-generation iPad mini.