Enlarge / The Slim 9i is the flagship.

On Thursday, Lenovo introduced a series of laptops with various options and designs. The Slim laptops, formerly called IdeaPad Slim, are a new lineup of clamshell designs that will look to compete in June with thin and light builds, high-end components, high-res OLED displays, and some unique textures. 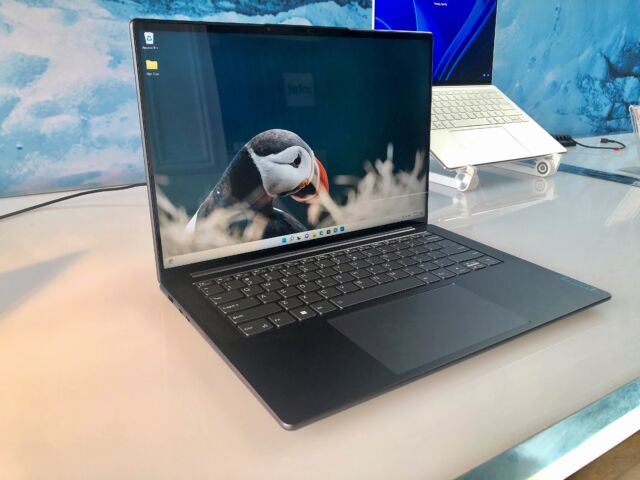 The standout products are the 14.5-inch Slim 7i Pro X and Slim 7 Pro X—with the “i” meaning it has an Intel CPU. Lenovo is launching the “X” moniker to represent laptops made for creators. In addition to offering up to an RTX 3050 laptop GPU (4GB GDDR6), Lenovo also fine-tunes the machines’ hardware, a Lenovo rep told Ars Technica when we checked out the laptops in person. AI software also helps manage performance and battery usage.

The new laptops also have a 70 Watt-hour battery compared to the non-X’s 60 Whr. Lenovo claimed the battery would last up to 12.5 hours of 1080p video playback with an Intel CPU and 15.5 hours for the AMD version.

Meanwhile, the AMD version of the laptop goes up to a Ryzen 9 6900 HS Creator Edition, with eight cores, 16 threads, and a base clock speed of 3.3 GHz that can boost to 4.9 GHz. It also features AMD’s 12 GPU-core Radeon 680M graphics.

Lenovo also equipped the creator machines with ultra-fast RAM. The Intel machines support up to 32GB of LPDDR5-6000 memory across two channels, while the AMD version can hit 6,400 MHz—as fast as LPDDR5 gets. 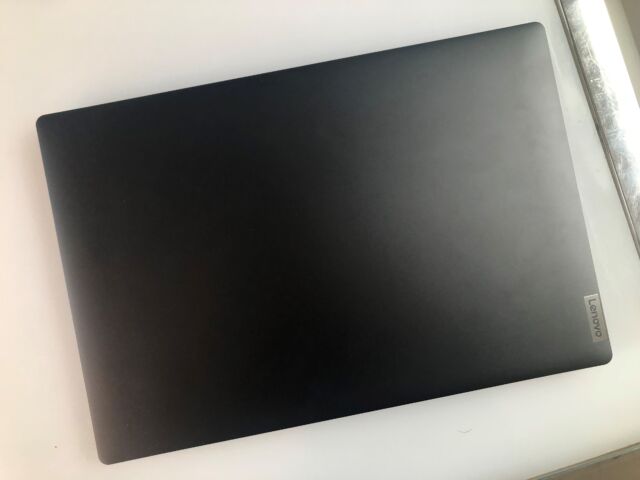 The Pro X laptops prioritize resolution and speed rather than color coverage, though 100 percent sRGB is fine for those creating for Windows, for example. The 3072×1920 screens have a high 120 Hz refresh rate and Nvidia G-Sync Adaptive-Sync to fight screen tears. Max brightness is a claimed 400 nits for the IPS panel.

Lenovo Slim 9i: A touch of glass 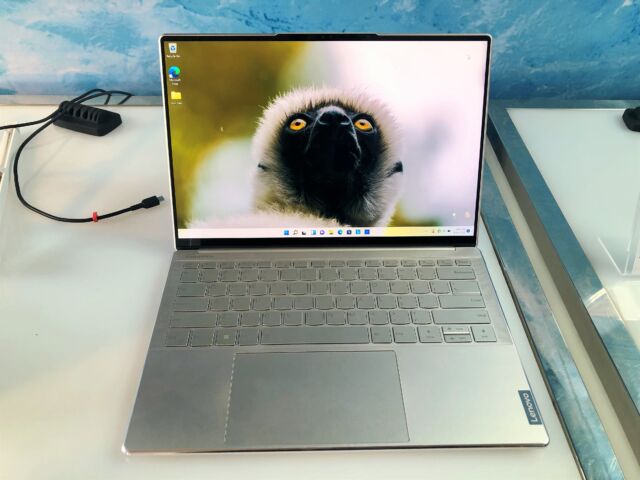 Enlarge / The Slim 9i’s screen looked vivid with saturated colors in our short time with it.

The flagship of the Slim series, the Slim 9i, has a higher starting price of $1,800.

The Slim 9i at least looks like a flagship, thanks to a touch of glass. Like a modern smartphone, the lid is covered in 3D glass. A Lenovo rep told us that the glass doesn’t provide extra protection, but makes the laptop look sleeker. The glass also played well with the rounded, shiny edges of the laptop’s deck. The glass encasement seemed susceptible to fingerprints, though, and we’d hate to imagine the laptop’s appearance should you ever damage the glass.

You should be able to squeeze out more battery life from the Slim 9i’s 75Whr battery compared to the Pro X machines. Lenovo claims up to 15 hours of 1080p video playback. 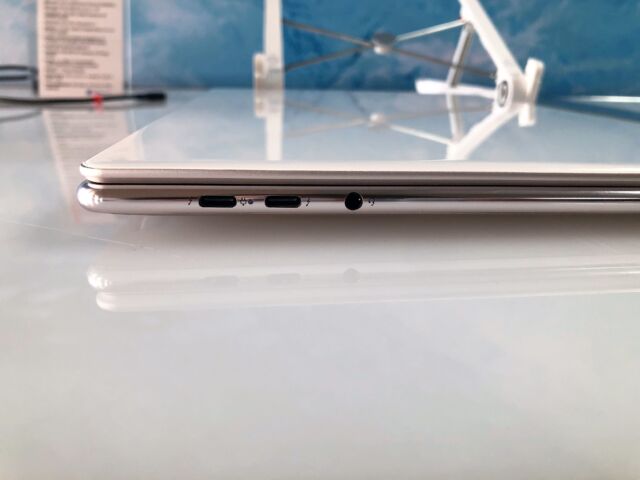 Enlarge / Port selection is skimpier than on the Pro X laptops with three Thunderbolt 4.0 ports and one 3.5mm jack.

Another boost over the so-called creator machines is in audio; the Slim 9i has two 2W tweeters, plus a pair of 3W subwoofers. If you want even more oomph and a similar design, consider Lenovo’s Yoga laptops, which include the same setup, plus a soundbar in the hinge. 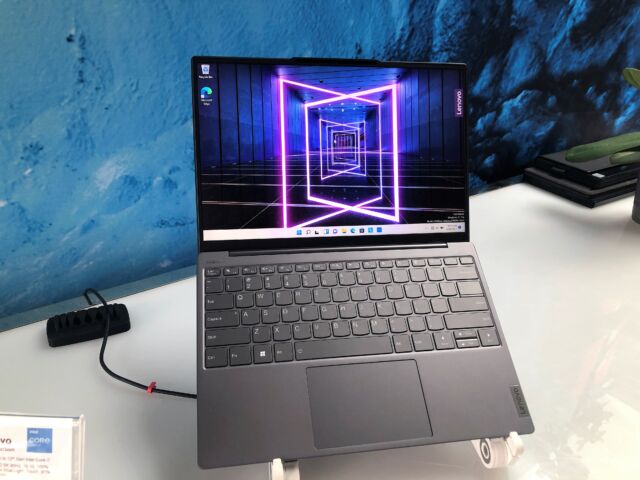 As the name suggests, the Slim 7i Carbon uses a combination of magnesium alloy and carbon fiber in the lid. You won’t find carbon fiber in the deck, as magnesium alloy offers better heat management and lower costs. That design made for a matte, soft finish with a gentle texture that helped with my grip. It also matched the premium feel of the ThinkPad X1 Carbon, which uses the same chassis materials. 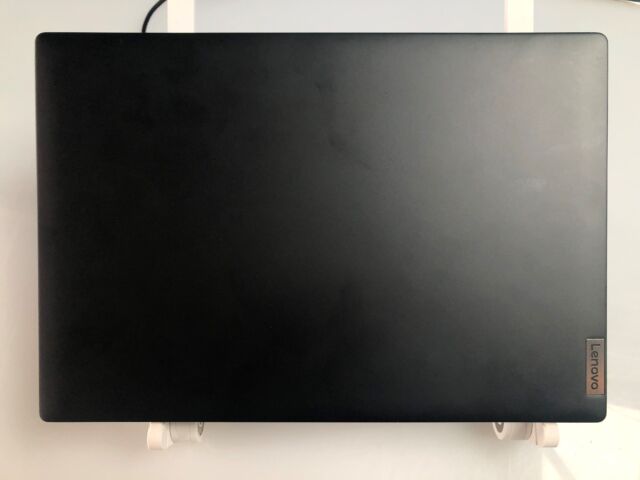 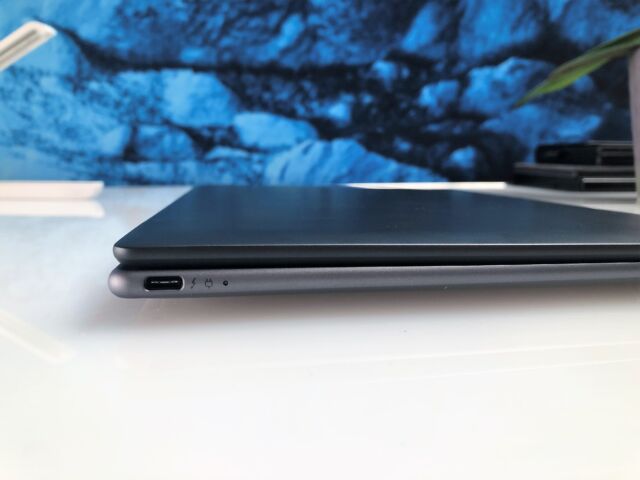 Enlarge / The laptop has three USB-C ports, including two Thunderbolt 4.