Meta’s Portal displays have always felt pretty niche. The 10- to 14-inch screens were heavily marketed as video-calling devices for apps like Facebook Messenger and Zoom. Even with the addition of music apps like Spotify and productivity apps like Microsoft Teams and a calendar, the products struggled to become something that felt necessary in tech-gadget-filled homes.

Rumor has it that Meta is pivoting the Portal from consumers to businesses, but first, the product is getting at least one more chance to prove it can add value to people’s homes. On Wednesday, Meta announced that the Portal Plus Gen 2 and Portal Go now support Duet Display, an app that can turn a display into a secondary monitor for Macs and PCs.

The Portal Plus is the same size as some of the best portable monitors, so it makes sense to repurpose it for that function. Because it’s built for video image quality, it has a decent resolution for a portable display—2160×1440.

Duet Display doesn’t require a display to be connected to a computer via a cable, so specific portals are now portable wireless monitors, too. 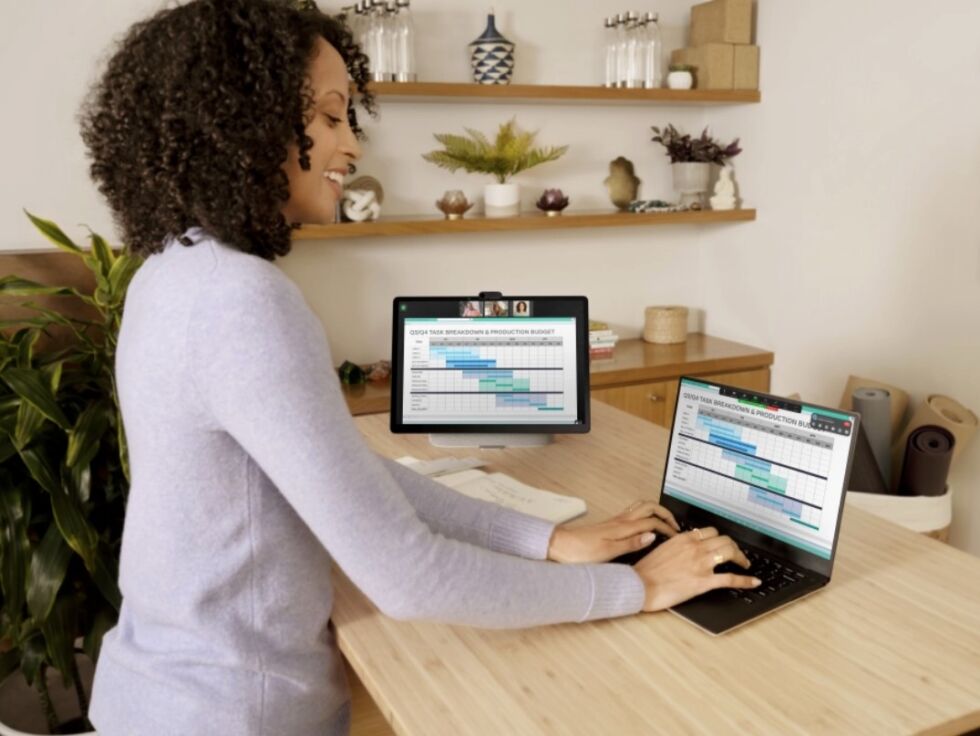 Enlarge / The portal connects to the system via Wi-Fi.

At a time when webcams are integrated into many laptops, and USB webcams are easier to find again, many consumers don’t need a display dedicated primarily to web calls. But an extra monitor? That’s more widely appealing. With the addition of Duet Display, Portal owners have further reason to think about their Portal when they’re not on a video call.

Meta also gave all Portals with a touchscreen—namely, the Portal Go, Portal Plus, Portal, and Portal Mini—a Meta Portal Companion app for macOS. The app enables screen sharing during video calls and provides quick access to video call features, like mute and link sharing in Zoom, Workplace, and BlueJeans.

In June, The Information reported that Meta would stop making Portals for consumers and start pushing them as business tech as part of a hardware restructuring strategy to appease investors. At the time, the site reported that Meta sold 600,000 Portals in 2020 and 800,000 the following year, according to market analysis firm IDC.

Meta’s track record in hardware hasn’t been great. The Quest 2 is one of the most-used virtual reality headsets, but Meta’s Reality Labs AR/VR division, which also accounts for its Portal and Ray-Ban Stories smart glasses, is an expensive endeavor that lost $2.8 billion in Q2 2022. In June, Bloomberg reported that the division’s plans for a Meta smartwatch were scrapped about a month after Meta said it would be canceling and delaying projects to save money.

The new Portal features seem aimed at improving the experience of consumers who already have a Portal rather than attracting new buyers. We doubt people who overlooked the Portal thus far will rush to get one now that it can also be used as a secondary monitor.

It seems Meta isn’t ready to give up Portal’s potential piece of that pie, whether that means increasing the displays’ consumer value proposition or shifting them to businesses.