Enlarge / Microsoft’s Project Volterra is an Arm-powered developer desktop launching later this year. This image depicts two Volterra boxes stacked on top of one another.

Windows on Arm is arguably as successful as it has ever been—you can buy multiple Arm-powered Windows laptops and tablets, and those devices can run nearly the entire range of available Windows apps thanks to x86-to-Arm code translation. That said, Windows on Arm still accounts for just a fraction of the entire Windows ecosystem, and native Arm apps for the platform are still relatively rare.

At its Build developer conference Tuesday, Microsoft made a few announcements aimed at bolstering Windows on Arm. The first is Project Volterra, a Microsoft-branded mini-desktop computer powered by an unnamed Qualcomm Snapdragon SoC. More relevant for developers who already have Arm hardware, Volterra will be accompanied by a fully Arm-native suite of developer tools.

According to Microsoft’s blog post, the company will be releasing ARM-native versions of Visual Studio 2022 and VSCode, Visual C++, Modern .NET 6, the classic .NET framework, Windows Terminal, and both the Windows Subsystem for Linux and Windows Subsystem for Android. Arm-native versions of these apps will allow developers to run them without the performance penalty associated with translating x86 code to run on Arm devices—especially helpful given that Arm Windows devices usually don’t have much performance to spare.

Previews of these tools will begin to be available “in the next few weeks.” 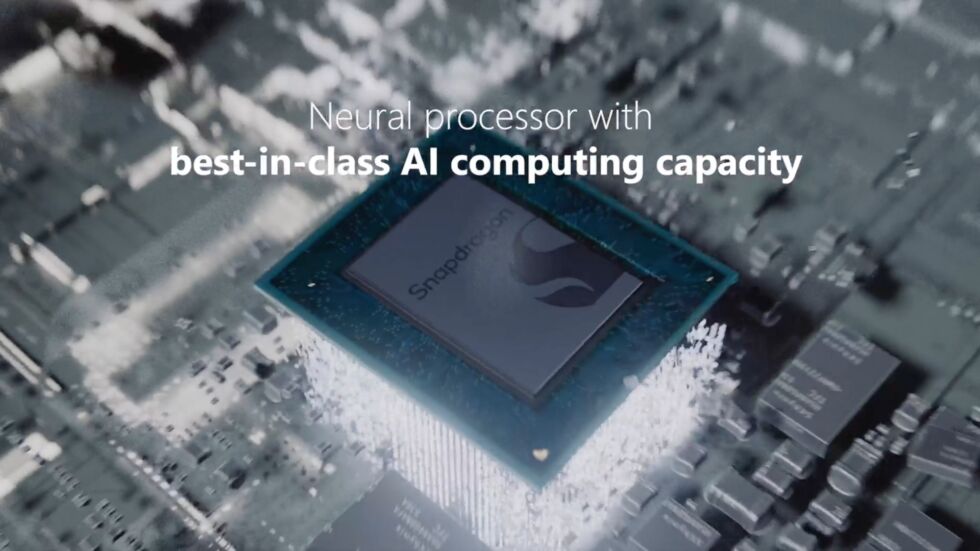 Enlarge / We don’t know exactly which Qualcomm SoC will end up at the heart of Volterra, but hopefully it will be one of the faster ones.

As for the Volterra hardware, what we know is that it’s running a Qualcomm SoC with a built-in neural processing unit (NPU), “best-in-class AI computing capacity,” and support for Qualcomm’s Neural Processing SDK. Microsoft is pushing it as a solution for testing AI and machine-learning apps, although depending on the other specs it could also be a good general-purpose development box for Windows on Arm apps.

Microsoft’s reveal video made it look like Volterra uses a standard NVMe SSD and that it will include an active cooling fan, suggesting a bit more expandability and performance than we’ve seen in other Windows on Arm dev boxes. It also appears to have a decent selection of ports for its size, with three USB-A ports, a mini DisplayPort, an Ethernet port on the back, and two USB-C ports on the side. Its stackable black enclosure is also made of “recycled ocean plastic,” like the Ocean Plastic Mouse the company introduced last year.

Project Volterra will be available “later this year” for an undisclosed price.

This isn’t the first hardware that Microsoft has pushed to encourage developers to try Windows on Arm. Last year, it listed the $219 ECS LIVA QC710 in the Microsoft Store, targeting it specifically at app developers. While small and affordable, the box’s 4GB of RAM, weak Qualcomm 7c processor, 64GB of internal storage, and lackluster port selection didn’t exactly give developers a lot of room to stretch their legs. Volterra looks like it could address some or all of those shortcomings.

One thing holding Windows on Arm back right now is a lack of great hardware—more specifically, a lack of great chips that can match or beat Intel and AMD’s performance while delivering better battery life. None of Qualcomm’s chips for Windows PCs have been anywhere near as fast as Apple’s M1, to say nothing of the faster M1 variants. We may not see Qualcomm’s first M1-class competitor until late 2023, well after Volterra is scheduled to be released.