A couple of years ago, Microsoft reformulated its Edge web browser with a backend based on Google’s Chromium codebase. Since then, the company has tried to make Edge stand out primarily by adding on extra features, mostly related to privacy, security, and online shopping.

One interesting new experimental feature that could be coming to Edge soon is a Cloudflare-powered VPN feature, according to a support document published last week. A VPN (or virtual private network) provides an encrypted tunnel for all of your network traffic, shielding it from the view of other devices on the same network.

Using the VPN service, dubbed the “Microsoft Edge Secure Network,” requires you to be signed in with a Microsoft account, just like cross-device syncing of bookmarks and extensions and plenty of other features. It provides up to 1GB of data per month, with no option to get more data if you want or need it—Edge will track your data usage and let you know when you’re getting close to your limit. 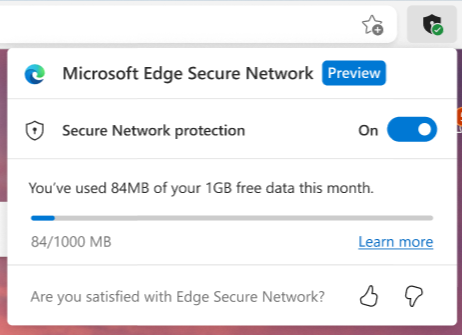 The Secure Network feature will track its own data usage for you.

That low data cap means Edge’s VPN won’t replace a subscription to a VPN service for people who run all of their traffic through VPNs or those who use them to circumvent geographical restrictions on video streaming. But it’s enough for occasional coffee shop Wi-Fi use, and that seems to be the type of usage it’s geared toward.

Using a VPN to safeguard traffic on a public Wi-Fi network arguably isn’t as important as it used to be, given the widespread use of HTTPS and browsers that increasingly prefer HTTPS connections to HTTP ones when they’re available. But if you manually force HTTPS connections and browse the Internet normally, you’ll still find plenty that’s unencrypted, and a VPN can protect things like DNS requests that HTTPS doesn’t always obscure.

Any VPN is only as private or as secure as the VPN provider you’re using—it can still see all of the unencrypted data you send it since it needs to send you the data your browser is requesting. Microsoft’s support post says that Cloudflare “permanently deletes the diagnostic and support data collected every 25 hours” and that the data Cloudflare processes “is subject to the Microsoft Privacy Policy.”