Enlarge / The Framework Laptop is getting its first major upgrade today.

We were fans of the Framework Laptop when we reviewed it last year. This was partly because its modular design prioritizes repairability and upgradeability when most other laptops don’t. But we also liked it because you didn’t need to make huge tradeoffs to get that repairability—the Framework Laptop is lightweight and has a high-quality screen, keyboard, and touchpad, helping it stay competitive with big-box thin-and- light laptops like Dell’s XPS 13 and the Lenovo ThinkPad X1 Carbon.

An upgradeable laptop is only worthwhile if you can actually upgrade it, though, and Framework is making that possible starting today: The company is introducing a new iteration of the Framework Laptop’s motherboard that uses 12th-gen Intel CPUs. A brand-new 12th-gen Framework Laptop starts at $1,049 for a Core i5-equipped base model, or $819 for a build-it-yourself kit with no memory or storage. These products will be available for preorder starting today, and shipping will start in July.

The 12th-generation Core processors use Intel’s latest Alder Lake CPU architecture, which combines high-performance P-cores and high-efficiency E-cores to maximize performance under heavy load and reduce power usage when your computer is mostly idle. The base Core i5-1240P CPU includes four P-cores and eight E-cores, a big boost in core count compared to the quad-core 11th-gen CPUs. The Core i7-1260P upgrade has the same CPU core count with boosted clock speeds and a small increase in integrated GPU performance, while the top-end Core i7-1280P option will get you six P-cores and eight E-cores.

The rest of the Framework Laptop’s hardware is staying mostly the same, although there are a few additional upgrades to be aware of. One is a 2.5Gbps Ethernet expansion card, the first wired LAN module to be available for the laptop. The card is based on Realtek’s RTL8156 chipset and will be available “later this year.”

The company is also releasing a redesigned version of its top cover made with a new CNC manufacturing process that “substantially improve[es] rigidity.” The new top cover will be the default option for all Framework Laptops going forward, though you can buy a new cover for your existing Framework Laptop for $89. 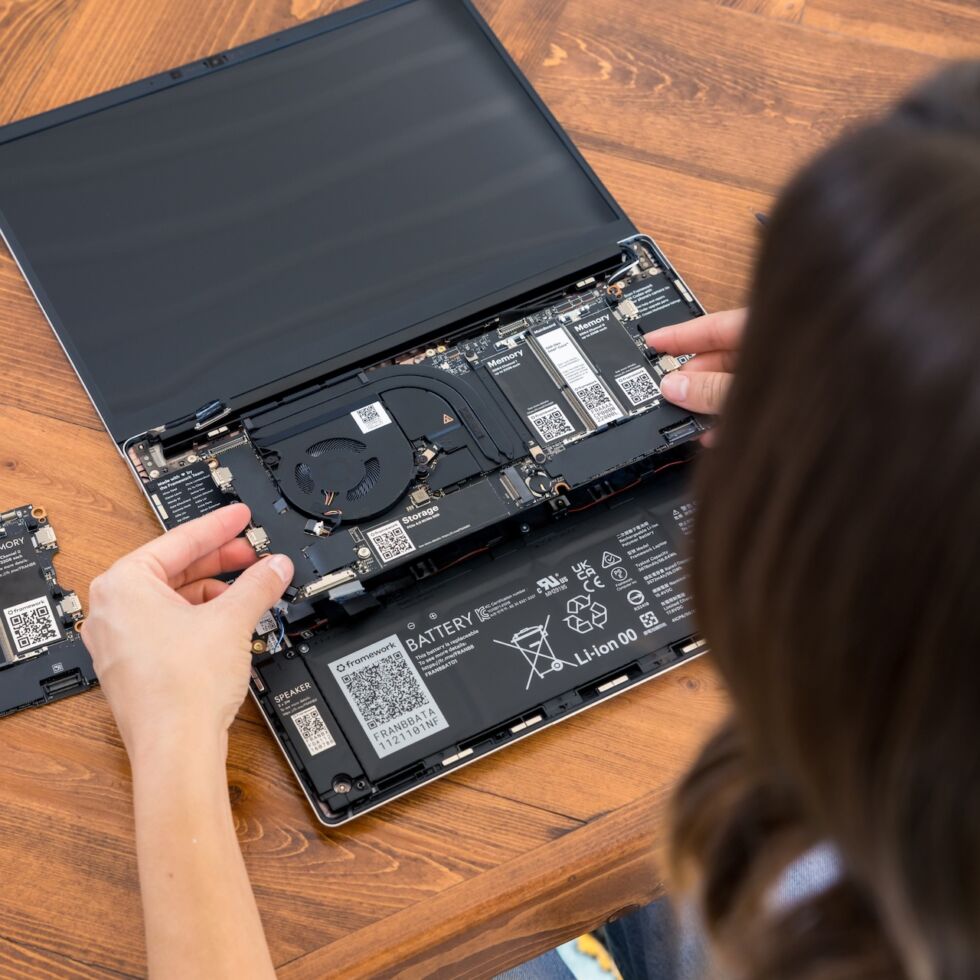 Enlarge / You can either buy a new Framework Laptop with the 12th-gen CPU installed, or buy a motherboard or upgrade kit that will spruce up an existing Framework Laptop.

The 11th-gen version of the Framework laptop is also sticking around as an entry-level option until it sells out, starting at $679 for a Core i5-1135G7-based DIY edition and $899 for an assembled system. The company has created a new one product comparison page to make it easier to figure out what you’re getting.

While many of Framework’s PCs will run Windows, the company boasts that the 12th-gen version of its laptop “continue[s] to focus on solid Linux support.” Framework recommends Fedora 36 because it “works fantastically well out of the box” and fully supports the Framework Laptop’s new CPUs, its Wi-Fi card, and its fingerprint reader. For now, though, you’ ll need to be careful about installing other Linux distributions—you need Linux kernel version 5.17.6 or newer to fully support Alder Lake’s hybrid CPU architecture, and prominent, actively maintained distributions like Ubuntu 22.04 don’t include that kernel version out of the box This problem will disappear for most Linux distros within the next few months, but for now you may need to upgrade the kernel manually to get the best-possible Linux experience on the Framework Laptop.

If you already own a Framework Laptop and want to upgrade, the company recently published 3D-printable case templates for the laptop’s motherboard. This makes it possible to turn an old 11th-gen Framework motherboard into a mini desktop PC.