Windows 11 has settled down a lot since its original release, but Microsoft continues testing new features and tweaks to the operating system in its Insider Preview program. So far this month, the builds have focused on bug fixes and UI tweaks, but a few notable changes are notable enough to call out.

This week’s build, version 22598, is relatively low on user-visible changes. One is that “a limited number of Windows Insiders” performing clean installs will have their desktop wallpapers set to rotating Windows Spotlight images by default. The other change is Microsoft experimenting with 4K wallpapers via Spotlight. There’s also a new album-centric view for artist pages in the redesigned Media Player app.

Last week’s preview, build 22593, brought some changes for the File Explorer and some window management improvements. The default view for new File Explorer windows is now called “Home,” though the available content doesn’t change much. Folders can still be pinned to your Home window, but the “Quick access” label has been moved from the navigation sidebar to the main window, and “pinned” files are now called “Favorites” to make them more consistent with the labeling used in OneDrive and Office. 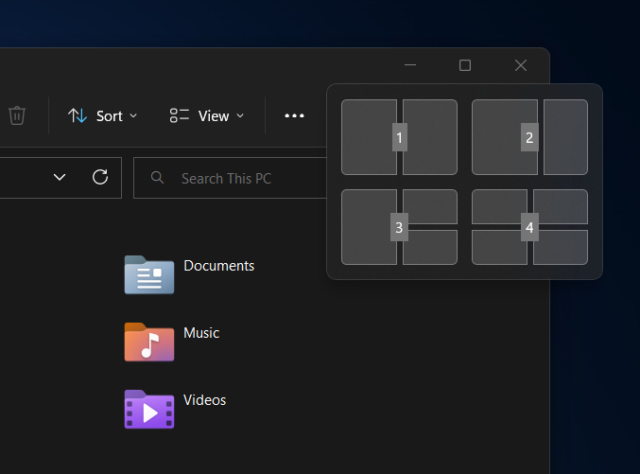 When you bring up the Snap Layouts pop-up with the Win+Z keyboard shortcut, the preview build also labels each layout option with a number, making it easier to pick a layout from the keyboard without moving your hand to your mouse or trackpad.

These preview builds of Windows 11 will also begin actively recommending that you enable the memory integrity security feature, showing you a notification when it’s turned off (as it will be on all but the newest Windows 11 PCs by default). As we’ve written, the memory integrity feature (also called HVCI) runs best on newer CPUs that support a feature called mode-based execution control (MBEC). But even with MBEC support, you may notice a minor performance penalty for games and other CPU-heavy tasks. It’s an easy call to enable it on a general-purpose laptop or a desktop you use primarily for work, but the trade-off could be more noticeable for a gaming PC or workstation that needs all the CPU power it can get.

Enabling the memory integrity feature won’t be a prerequisite for installing or upgrading Windows 11 on these PCs, and the warning prompt is dismissible. If you’re running Windows 11 on a PC with an unsupported CPU, it’s probably best not to enable the memory integrity feature. Running it on older processors without MBEC support can have a much more noticeable performance penalty.

Enlarge / If the Memory Integrity feature is off, Windows 11 is going to start letting you know about it.

The last few Windows 11 Insider updates have been released to the Dev and Beta channels. The two will eventually split again; the Dev channel will receive more experimental and less-stable features, and the Beta channel will be a place to experiment with likely public Windows features. Dev channel users who would like to switch to the more-stable Beta channel are encouraged to do it now while both channels are still receiving the same builds.

Some of the new tested features in the Insider Preview channels will likely wait for Windows 11’s next big servicing update, due out sometime this fall. Others, particularly the bug fixes, “may make their way into” updates for Windows 11 21H2, the current public version of Windows.