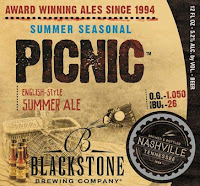 This pours a clear straw golden with a white head. Fruity and herbal nose. Lighter side of medium bodied with average carbonation. Initial flavor of cereal-like pale malts, which really came across more German in character than English. Dry finish with a lingering grassy and herbal bitterness. Extremely smooth and clean for an ale. If you are into California Commons and hop forward Pilsners, this seems like a blend of the two. Very good, simple, and perfect for those hot days or summer cookouts.

Just in time to enjoy on summer’s hottest days, Blackstone Brewing Company®, brewer of award-winning ales since 1994, has brought Picnic®, an English-style summer ale, back to Middle Tennessee.  Blackstone, which has operated Nashville’s oldest brewpub since 1994, opened a state-of-the art brewing and bottling facility in mid-2011.

Picnic® is described as a lighter version of a classic Pale Ale that retains the wonderful flavors and aromas of British Pale Ale malt and hops, while using a significant portion of wheat for a lighter body and crisp finish. Blackstone brewed Picnic® with imported barley malt and hops from Great Britain to create this authentic ale. First introduced in summer 2012, Picnic® was selected by CraftBeer.com to be featured in its “Beers of Summer – Craft Beer’s Summer Seasonals.”

“Picnic® is a great beer; it is a hot weather refresher that doesn’t sacrifice flavor or character,” said Stephanie Weins, co-owner of Blackstone Brewing Co.®

Picnic® is available for a limited time, both on draft and in bottles, at bars and stores in the Nashville, Clarksville, Knoxville, and east Tennessee areas.

Opened in 1994, Blackstone Restaurant & Brewery® is Nashville’s oldest and most popular brewpub. Blackstone award-winning craft beers Chaser Pale®, Nut Brown Ale, American Pale Ale and St. Charles Porter® are brewed at both the brewpub and at the new, state-of-the-art, brewing and bottling facility, Blackstone Brewing Company®.  Chaser Pale®, Nut Brown Ale and St. Charles Porter® have been awarded medals at both the Great American Beer Festival and the World Beer Cup; St. Charles Porter® is the most award-winning Brown Porter in the history of the Great American Beer Festival. Visit www.blackstonebrewery.com for additional information.