Pixel Watch prototype is left at a bar, gets photographed

Enlarge / The Pixel Watch. This bootloader is the only thing the watch would display. 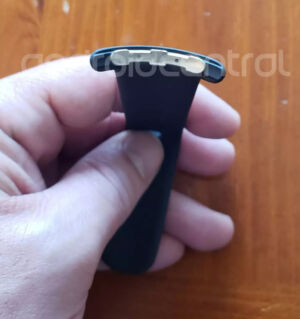 Enlarge / The watch bands don’t have pogo connectors, but the watch does?

The Pixel Watch had an iPhone 4 moment over the weekend. Just as Apple’s 2010 flagship leaked after being left at a bar, Google’s upcoming Pixel Watch was apparently lost and found at a restaurant. Android Central got ahold of photos of the leaked device first, and the person who found the watch did a Reddit AMA as the user “Tagtech414” and shared more pictures. Sadly, the device doesn’t actually work. No one knows how to charge it, and it might be remotely wiped anyway. Keep in mind that these are pictures of a prototype, not the final model, and this watch was sitting in the lost and found for “several weeks” before the Internet got ahold of it.

We do get a good look at the hardware, though. Google’s smartwatch is a clumsy little glass circle. The top glass cover is the widest part of the watch circle and seems designed to look like the top “half” of the watch. It actually only makes up about one-third of the watch depth, which makes the watch seem thinner than it is. 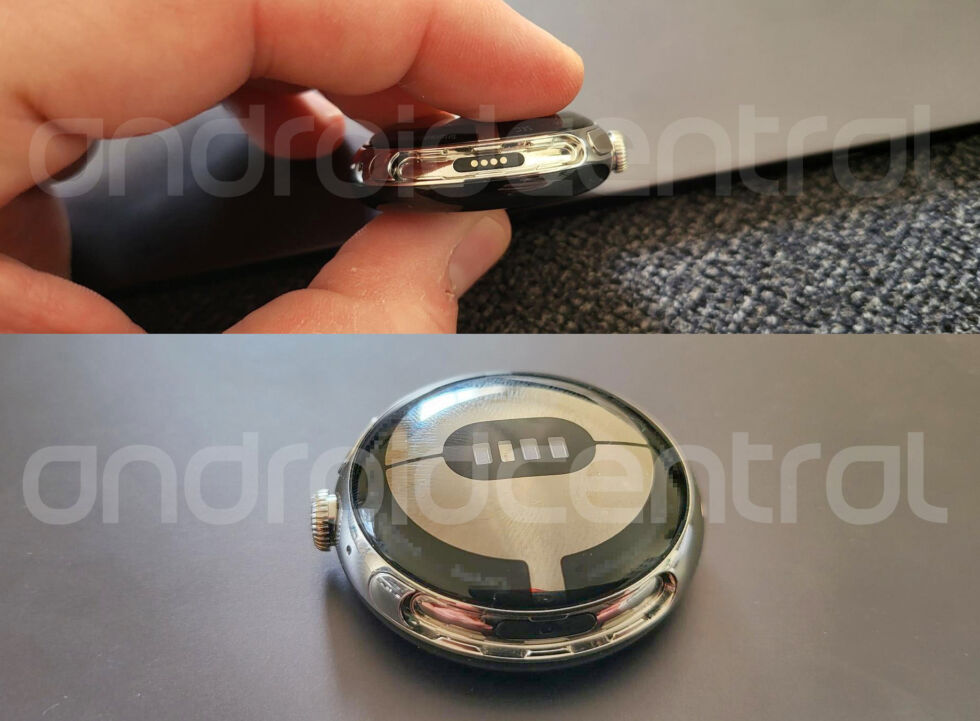 Enlarge / The top and bottom watch band connectors. One has a set of four pogo pins, one doesn’t. 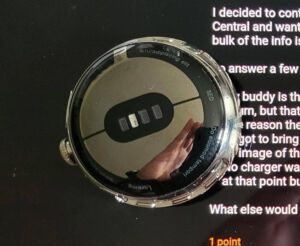 Enlarge / the back I spy a heart rate monitor, an ECG sensor, and “lorem ipsum” placeholder text. A silver ring starts the bottom watch taper, with two big slots for the removable—and proprietary—watch band. Something strange is going on with these watch band connections. Both of them have black inserts in them, and one (and only one) side has a set of four gold pogo pins. What these are for is anyone’s guess. They could be for a data connection to some sort of smart band, but the watch bands don’t have corresponding pogo pins to connect. It could be the world’s jankiest charging solution, which would require removing a watch band to power the watch. It could also just be a prototype quirk, allowing for a USB connection for flashing.

The silver middle section also houses a spinning digital crown and one extra button on the right side, while the left side has what looks like a speaker and microphone.
Advertisement

The bottom of the watch features a heart rate monitor (the four sensor slots in the middle) and an ECG sensor (the two big silver halves). There’s also some “lorem ipsum” placeholder text around the perimeter of the watch. 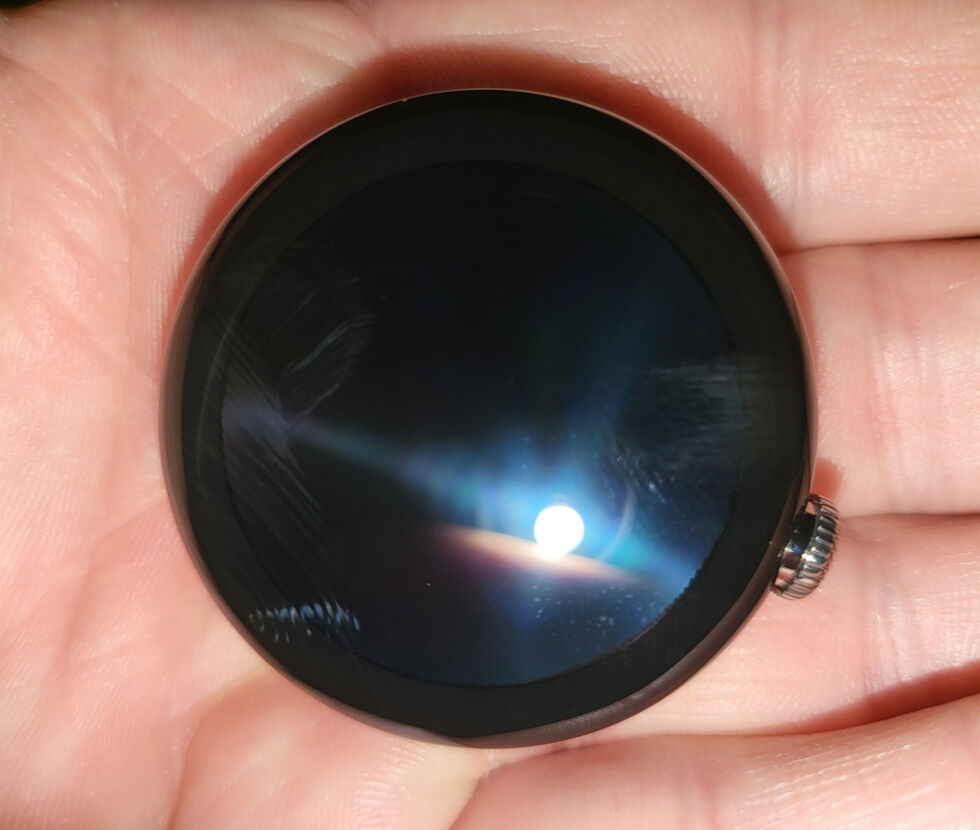 Enlarge / You can just about make out the bezels in this picture.

While the watch won’t turn on anymore, we did get a look at the front of the device thanks to some clever flashlight work. Tagtech414 says that “the bezels are pretty substantial.”

This leak gives us a great look at the physical design of the Pixel Watch, but it doesn’t answer many of the burning, make-or-break questions we have about Google’s first watch. We still don’t know what SoC it uses, and we don’t know if Google’s take on Wear OS 3 (without Samsung’s heavy influence on the Galaxy Watch 4) is any good. Hopefully, we’ll find out more about the watch at Google I/O next month. 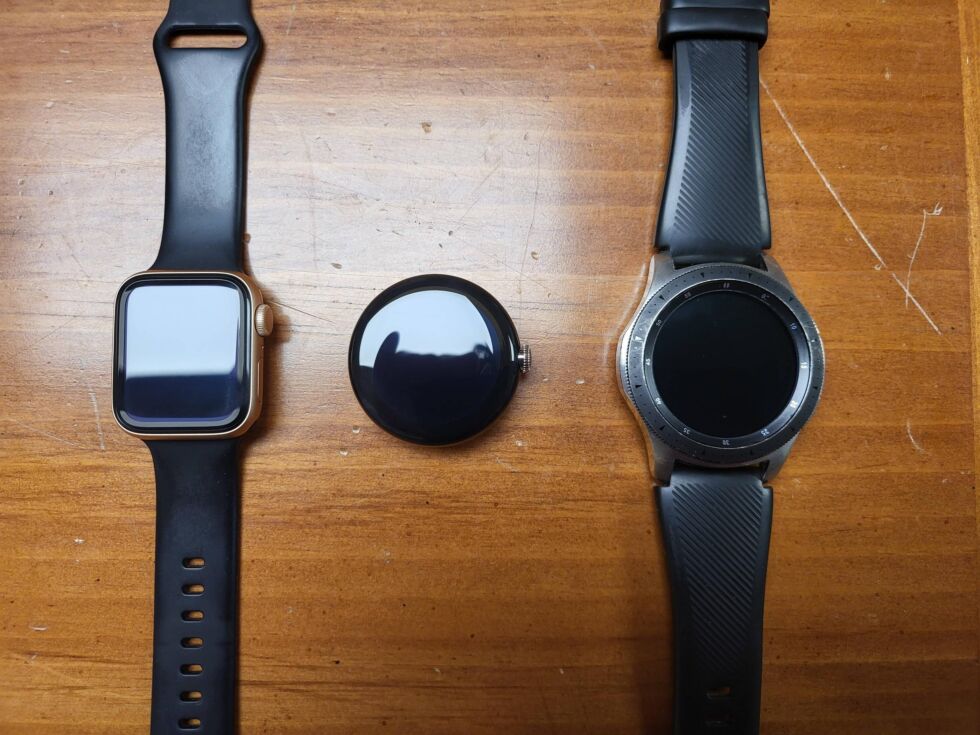 Enlarge / The Pixel Watch in between the 40mm Apple Watch and 46mm Galaxy Watch.