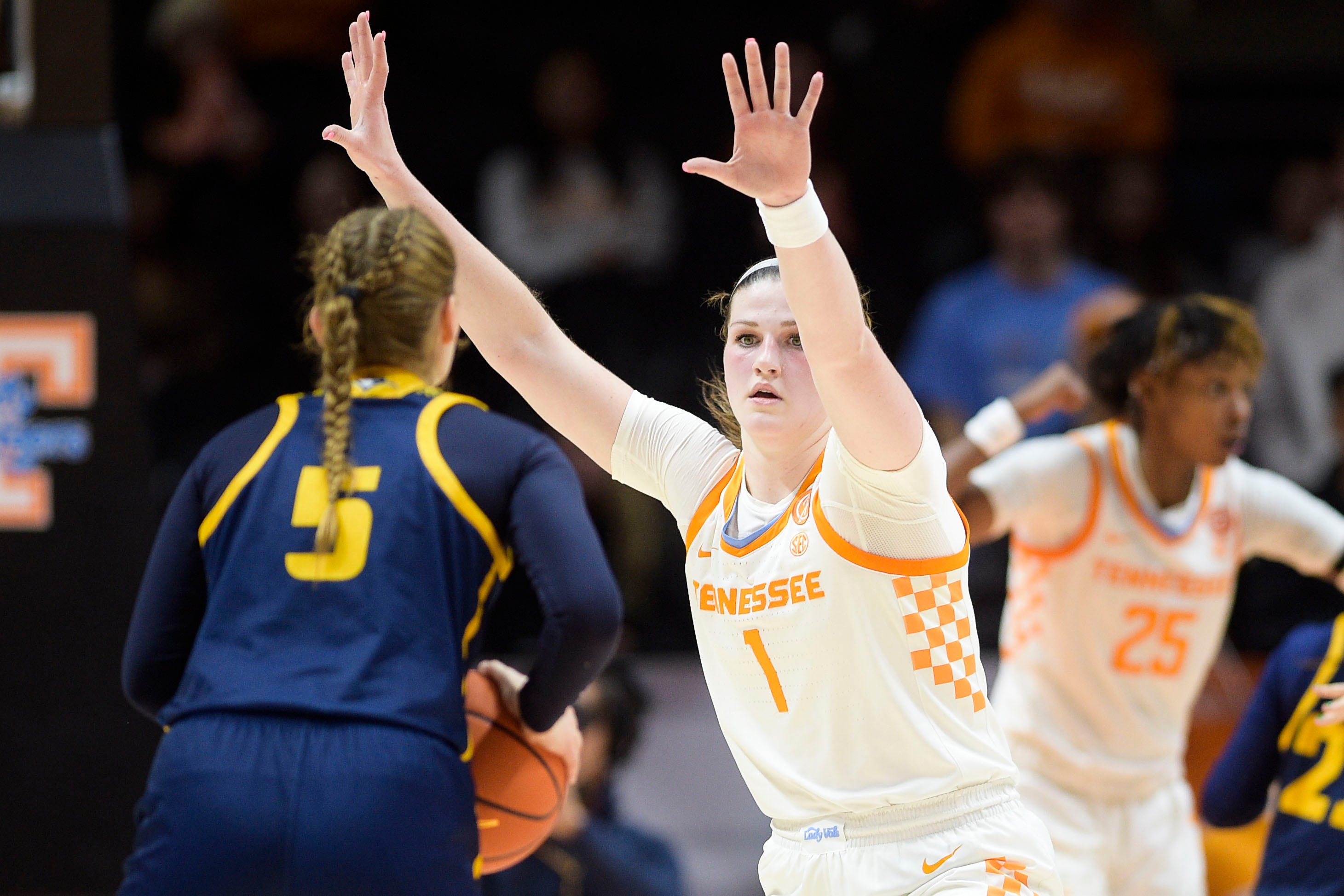 Sara Puckett got the ball in the post and kicked it out to Brooklynn Miles.

Miles fired off a 3-pointer, but it bounced off the rim. Puckett was there to grab the offensive rebound and hit Miles as she cut to the basket. Miles finished at the rim and drew the foul, too.

That was only one of the impact plays Puckett made in Tennessee’s 69-39 win over Chattanooga (6-5) on Tuesday at Thompson-Boling Arena. With the Lady Vols (5-5) down two starters, Puckett stepped up in the win and recorded the highest plus-minus on the team (+21).

The sophomore was poised in her fourth career start and had eight points, one rebound, four assists, two blocks and a steal. Puckett said the team stressed defense last week in practice and her goal was to let her defense lead to offense.

“That’s what I’ve also stressed personally, was my defense and to be able to get some steals out there. It’s not my thing, typically,” Puckett said. “So to be able to do that was just a big confidence booster.”

“She played tough,” Harper said. “I thought she had great awareness on the defensive end and looked more comfortable offensively. So, hopefully, this will really kickstart her and get her going in the right direction.”

Tennessee was without senior center Tamari Key, who was not at Thompson-Boling Arena on Tuesday. Key had 11 points, seven rebounds, three blocks and an assist and a steal in Sunday’s loss to Virginia Tech. Harper said Key’s absence was due to medical reasons and she would provide an update when she had it.

In Key’s absence, sophomore forward Karoline Striplin got her first career start. She found success against the Mocs and had seven points, three rebounds and one block, steal and assist – Striplin even hit a 3-pointer.

Rickea Jackson and Jasmine Franklin were out for the second straight game. Jackson is out indefinitely as a coach’s decision and Franklin is still in concussion protocols. But unlike Sunday, Franklin was at Thompson-Boling Arena on Tuesday.

Jillian Hollingshead returned to play Tuesday after sitting out of Sunday’s game due to concussion protocols. But she didn’t miss a beat and had nine points, five rebounds and two blocks.

The sophomore forward looked the most confident she has been all season on both ends of the court.

Tennessee utilized her athleticism offensively by getting Hollingshead the ball at the high post. None of the Mocs could stop Hollingshead, who was a nightmare for them on defense, too.

Harper said Hollingshead’s good at the high post, but she also has great post moves, providing some flexibility offensively.

“I love the fact that we can move her around,” Harper said. “I think the more she’s played, the more comfortable she has been.”

Hollingshead didn’t give up anything easily in the paint and jumped multiple passes into the post. On one of her blocks, Hollingshead nearly sent the ball into the stands because she swatted it so hard.

The Lady Vols held the Mocs to single-digit scoring in the first two quarters.

Chattanooga only scored 15 points before halftime, hitting 6-of-21 field goal attempts. It pulled even with Tennessee’s scoring in the third, matching the Lady Vols’ 14 points. But Tennessee ramped things back up defensively in the fourth quarter and only allowed 10 points.

Jordan Horston, who played 12 minutes, led the team with 14 points. All of the 12 Lady Vols who played scored except Edie Darby, but no one besides Horston scored in double digits.