As expected, Apple today announced details of the next version of the Apple Watch. It’s called the Apple Watch Series 7 and features a new Retina display with 20% more screen real estate, brighter indoor performance, and smaller bezels that are 40% thinner.

Apple says that the “stronger geometry” screen makes it the most durable “crack-resistant” display on an Apple Watch. The Series 7 is also IPX6 dustproof, a first for Apple Watches, and also waterproof up to 50 meters. According to Apple, the larger display area has made it easier to introduce a full QWERTY keyboard that can be typed or crossed out to enter text. The bigger screen also means slightly larger watch cases. Each grew by one millimeter from 40 and 44 millimeters for the 6 series to 41 and 45 millimeters for the 7 series.

Not much was said about new internals during today’s Apple announcement event. Apple didn’t mention a new chip or other computing component for this upcoming device with watchOS 8. But there are finally improvements in loading speed. With the new USB-C Apple Watch charger, the Series 7 can be charged from zero to 80 percent in 45 minutes and can achieve eight hours of sleep tracking after just eight minutes of charging, according to Apple. Although the Series 7 battery charges 33 percent faster than its predecessor, it still has the same battery life of 18 hours as the Series 6. 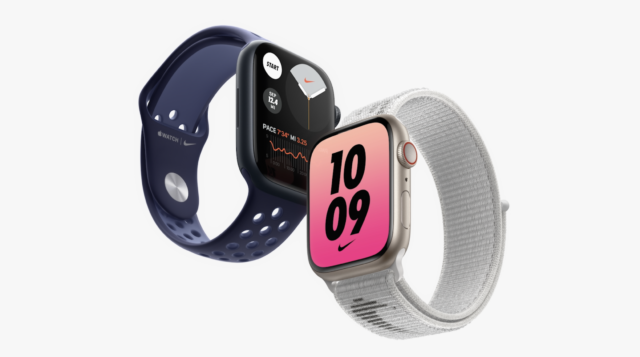 Among the many new fitness features touted through a promotional video, the Series 7 can measure users’ tennis serve speed or the distance of a golf shot, and “Hey Siri” prompts can tell users how far they have ridden their bikes. The Series 7 also detects cycling sessions and automatically pauses and restarts when stopped. Fall detection while cycling has been added, and Apple says the algorithm for e-biking has been improved to more accurately calculate calories. Sleep tracking also adds breathing rate to sleep data.