Counterpoint Research released a new report on the smartwatch market, and Wear OS is a big winner. Just three months ago, Google and Samsung teamed up to revive Wear OS, with the new Wear OS 3.0 debuting on the Galaxy Watch 4. The latest data from Counterpoint see the partnership as a resounding success, with Wear OS’s market share skyrocketing from 4 percent in Q2 2022 to 17 percent in Q3 2022.

The collaboration between Google and Samsung was a complete reboot of both companies’ smartwatch strategies. Google was sliding back and forth at the bottom of the sales charts as it had apparently lost interest in Wear OS for years. The last major OS release was Wear OS 2.0 in 2018, and that has been stagnating in the market for years. The early days of Wear OS tech’s big partners like Samsung, LG, Sony, and Motorola had left the platform, and only fashion brands like Fossil hung around making watches. Qualcomm was the main SoC vendor, and while Apple revolutionized the performance of a smartwatch SoC, Qualcomm didn’t really give up all the effort and choked the Wear OS market for years with sub-par chips.

Samsung left Google’s smartwatch ecosystem after the initial release and went into business for itself with Tizen OS. Tizen is a Linux-based operating system from Samsung built from the ashes of other failed Linux mobile operating systems like Nokia’s Maemo and MeeGo, Intel’s Moblin, and Samsung’s Bada and LiMo. The operating system has been described by a security researcher as “the worst code I’ve ever seen” and doesn’t offer much support for third-party apps. Samsung’s strength lies in hardware, and unlike Qualcomm, Samsung’s Exynos division regularly produces flagship smartwatch SoCs with modern transistor size and decent ARM CPU designs. Combining the two meant tying Google’s operating system, software, and app ecosystem with Samsung’s hardware, marketing, and sales expertise, a combination that spawned the Android phone juggernaut that exists today. 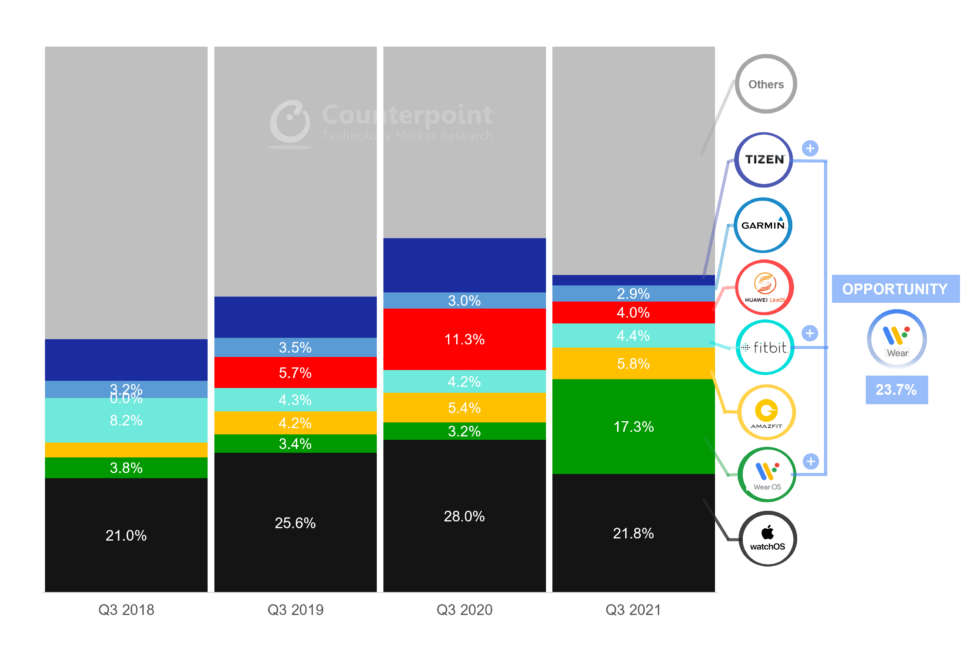 The partnership is already working for both companies. Counterpoint says: “Thanks to the launch of the Galaxy Watch 4 series, Samsung has hit its highest quarterly shipments, narrowed the gap to Apple and reclaimed second place from Huawei.” Samsung’s market share rose year-on-year from 9.9 percent to 14.4 percent.

Apple still ranks first with the Apple Watch, but Counterpoint says Apple’s smartwatch market share fell 10 percent year over year to 21.8 percent in the third quarter, thanks to the Series 7 watch lagging into the fourth Quarter. It’s a good bet that Apple’s market share will rise again with the release of new hardware, but right now Wear OS is within striking distance of # 1 – a position that was unthinkable a year ago.

Wear OS is also likely to have some growth ahead of it. Right now, Wear OS 3 is exclusively available on Samsung’s Galaxy Watch 4, and with Google saying partners should provide updates in the second half of 2022, Samsung appears to have an exclusive one-year deal on the new operating system. Qualcomm is planning a “ground-up redesign” of the “next generation” of its smartwatch chips in 2022, so we’ll likely see some non-Samsung OEMs jump on board with modern, expert smartwatch designs for Wear OS 3. 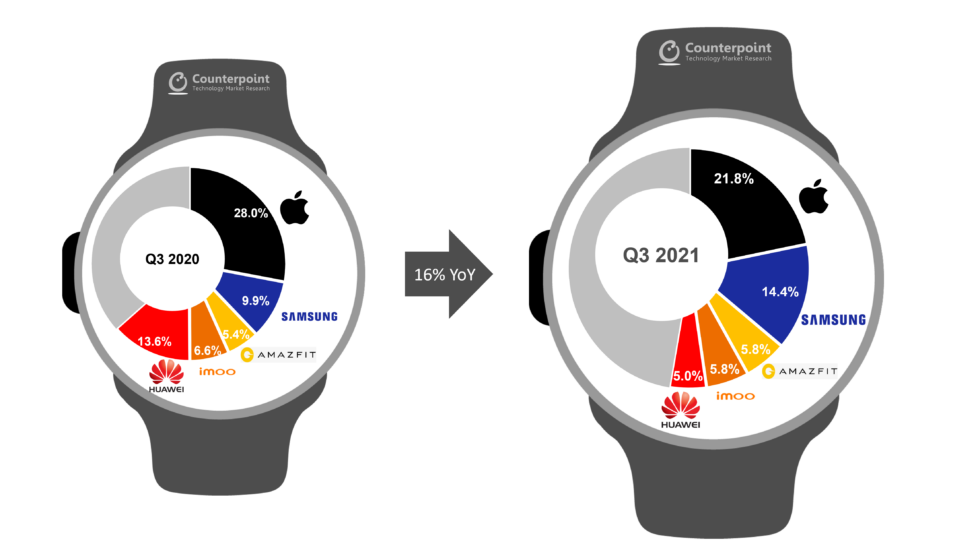 If we look at the smartphone market, another reason Android devices regularly outperform Apple is a lower price tag, and Wear OS 3 is not yet taking advantage of that. Counterpoint says that “a third of the smartwatches sold in the third quarter of 2021 were priced below $ 100,” and the research firm expects Samsung to hit the market in a few years to hit the # 1 OEM spot . The Galaxy Watch 4 starts at $ 249.99.

Google also has to do something with Fitbit, which currently accounts for 4.4 percent of the smartwatch market. Fitbit said it eventually plans to make Wear OS watches too.